Despite local concerns from environmental groups the Colter Offshore Oil Exploration has been granted an extension for exploration in Poole Bay until the end of March 2019, despite earlier assurances their work would be completed before the end of February 2019.

Both environmental and business groups have expressed concerns over the possible impact of an accidental spill of oils or chemicals which would undoubtedly have a detrimental effect on both wildlife and also the leisure trade in the towns. 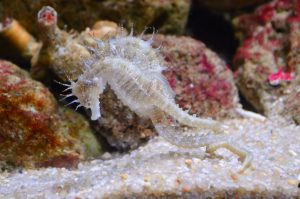 In a statement for Dorset Wildlife (www.dorsetwildlifetrust.org.uk) Emma Rance, DWT’s Marine Conservation Officer said, “Despite our requests, DWT continue to be worried about the remaining drill cuttings that will be discharged onto the seabed with the potential to impact species within the vicinity.  Studland Bay which is only 4km away from the drill site is a known breeding ground for seahorses.  Short-snouted seahorses (protected under the Wildlife & Countryside Act 1981) are recorded within the licenced drilling area in Poole Bay.”

Local councils have come under increased pressure, especially on social media, where many are confused as to why we have an Oil Rig in the bay but only a few years back a wind energy farm which many see as more environmentally friendly was turned down. Speaking about the latest extension Bournemouth Council released a statement distancing them from the extension and making known their disappointment. Councillor John Beesley, Leader, Bournemouth Council commented

“On behalf of Bournemouth Council, I submitted robust objections to the Colter Offshore Oil Exploration Well proposals in February 2018 in response to the Oil and Gas Authority Regulators’ consultation on the Environmental Impact Assessment (EIA).

“Despite this, consent was granted to the applicant Corallian Energy by the Central Government Regulator, OPRED, much to our disappointment. We understood from the Regulator that to comply with the approved mitigation measures, the applicant’s operations must be completed by the end of February 2019, so we are surprised to learn that an extension has been approved by the Regulator for the operations to be completed by the end of March 2019.

“Bournemouth Borough Council were not consulted or invited to comment by OPRED on the time extension, which is deeply disappointing. We continue to seek assurances from the Regulator that the full range mitigation measures they have approved are being complied with. We would want to see this operation finalised at the earliest possible opportunity so that risks associated with the operation to our marine environment can be eliminated.”

It would seem Bournemouth were not alone in not being consulted as Councillor Janet Walton, Leader, Borough or Poole commented:

“Borough of Poole is extremely disappointed to learn that the Colter Offshore Oil Exploration Well has been granted an extension until the end of March. Unfortunately, the Borough of Poole was not consulted or asked for our views on the impact of this extension, but had we been so, we would have put forward a response that highlighted our previous position.

BH Living understands that environmental groups are planning more protests in the town over the coming weeks.

Do you agree with the exploration or do you share many of the concerns? Comment below or email the editor at editor@bhliving.co.uk