The Show Man 2019 tour is a brand-new show and follows on from the hugely successful 2018 All Night Long tour. Show Man features an incredible team of dancers and world class musicians along with two amazing singers in a mixed routine featuring Ballroom splendour, adrenaline-charged Latin and pulsating show tunes; this was a show that had it all.

Curtain up and an incredible opening brings this show alight as with the help of local stage school, Stagewise, the whole cast opening with their version of The Greatest Show from The Greatest Showman which immediately sets the bar high for the rest of the evening. A mixture of dances follows all perfectly choreographed to music from Prince, Michal Jackson and Judy Collins (Send In The Clowns) that kept the tempo high for most of the opening period before an amazing Argentine Tango brought the first half to a close. 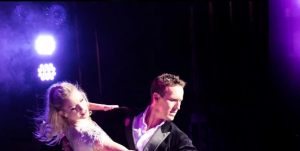 There was no let up in the second half with dances and music from shows including La La Land and a song new to me but worth mentioning, Cinderella by Steven Curtis-Chapman, look it up, it’s a tear jerker. Brendan is a performer, he interacts with the audience in a way you do not normally enjoy with him jumping off the stage and reading out some birthday messages, even stopping for the odd selfie on his way.

As you would expect with a show of this calibre the choreography could not be faulted, the routines had been set down to the most meticulous detail and was delivered by all the dancers with precision perfection. Equally the costumes were phenomenal, sequins a plenty on many of the dresses and in all outfits the vibrant colours added extra glitz around the venue highlighted by the venues spot lights.

Following a fantastic evening of dance and theatre the whole cast enjoyed a well-deserved standing ovation. On leaving the venue I spoke with a couple of people who like all had beaming smiles on their faces, Mary of Hamworthy said to me “It was marvellous” while Fred, a retired dance teacher from Broadstone described the show as “Fast and Furious, I loved it”.

This is a great evenings entertainment and before the show ended Brendan said they are back next year with the same show so if you missed it this year then make a note in your diaries for next year, it will be worth it.