Legendary band 10cc visit Bournemouth (Pavilion) on 6 March 2019 as part of their current UK tour. Co-founder of the band Graham Gouldman recently took time out to speak to BH Living about plans for their upcoming tour. But we also couldn’t help but take a look back over the bands’ remarkable 47 years in the music industry.

It was a really cold Friday when I got to speak with Graham, in fact it was the coldest day of the winter so far but Graham was far from cold when we spoke and I genuinely warmed to the guy as he shared anecdotes and memories with me.

Speaking with Graham was an easy relaxing experience; I started off by asking him if he was looking forward to his Bournemouth gig and if he had any fond memories of the town.

Okay being a local you can call me bias but I often wonder if performers see Bournemouth on their tour list and look forward to coming to our part of the world, so I asked if he ever gets time to enjoy our lovely beach or look around the town:

I never really get time for walking on the beach. By the time we’re organised and we’ve sound checked, there’s no time, usually. Not quite in a tourist headspace – when you’re on the road, you’re working, so you don’t feel much like looking around. It’s nice to get out and about if I can, otherwise every day is the same! There’s no throwing TVs out of hotel bedrooms anymore!

And then I asked the doomed question, the question many people ask when thinking about 10cc and the question that Graham hates being asked…. namely how did the 10cc name come about? His answer certainly game me more than I bargained for!

That’s the most boring question in the world! He told me, It’s so boring, I don’t even know if I shall answer it. I had to agree with him, though not wanting to lose him so early (its never happened yet) I did persevere and promised him that this would be the only boring question I would ask. I think he was convinced and he kindly obliged.

The guy that ran our original record company, Jonathan King had a dream. In the dream he was standing in front of Hammersmith Odeon. On the sign it said, “10cc – the best band in the world”, quite boring really. Then we started using the semen explanation, as it’s a bit more interesting: it is said that an average male ejaculation yields about 9 cc semen and therefore that 10 cc is an enviable quantity. 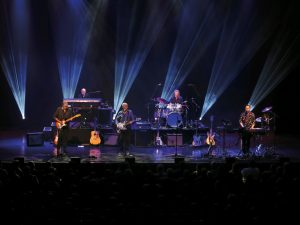 Getting the ‘boring’ question out of the way, I got back to the music the early days of the band. We talked about their first big hit, “Donna” back in 1972. In those days I listened on my trannie, a Ferguson I seem to recall, late at night on 208 Radio Luxemburg…who remembers that experience? I asked how if his musical inspiration had changed since those years?

Not at all, I get inspired by the same things I always got inspired by. Picking up on phrases people might say in a conversation, or see in a news item. Or you get a really nice title, and work backwards from there. The mechanism, if you like, hasn’t changed at all!

In the BH Living offices, it’s fair to say I’d probably be known as “The grandfather of the House”, namely if I were to ask anyone “Who likes 10cc?” I would get a lot of young blank faces. Still there were some who’s eyes lit up, so I asked them which 10cc hit they remember most, it turns out the most remembered was their 1975 hit , “I’m Not In Love” which was a world-wide hit reaching number 1 in the UK, Ireland and Canada. It also reached number 2 in the US; I asked Graham if at that time, they might have thought they had finally cracked the difficult US market?

I don’t think we’ve ever actually cracked the US market. Two big hits we did have though were – “The Things We Do For Love, and “I’m Not In Love”. Although we toured there a few times, we never really made it there. We were an underground band. We had our fans, but nothing that made us a nationwide hit. It’s a funny market, and it’s hard to predict who’s going to be big and who isn’t. To get into America is very difficult. It’s a vast country, but a niche market to get into.

Back to the UK scene I spoke with Graham about their 1976 album “How Dare You” With hits on that album like “I’m Mandy Fly Me” and “Art for Arts Sake”, it could be argued that the album contained some of their bigger hits but personally I found the album, “Deceptive Bends” which followed it more thought provoking. Perhaps it was more experimental with hits like “Good Morning Judge” and “The Things We Do For Love” I asked if there a reason for this change in musical direction between the two albums just one year apart?

Kevin and Lol left the band after ‘How Dare You’ which left myself and Eric writing all the songs so it was just us making the whole album. It was quite a big change, and that’s why you hear the difference. 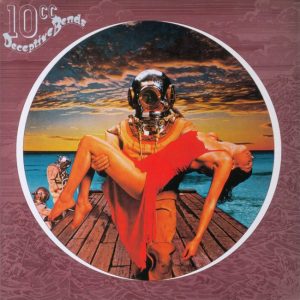 Being a 10cc fan myself I’d often wondered about the meaning behind the picture on the cover of Deceptive Bends (pictured) For readers who may not know it has an image of a diver carrying a lady out of the sea. With this following on from the album which had the hit “I’m Mandy, Fly Me” I asked if the lady in the photo was actually Mandy?

No, the lady in the red dress being carried by a diver isn’t Mandy. Deceptive Bends was my title. It came to me whilst I was driving, it was one of the roads on the way to Dorking, where our studio was, on the side of the road it had this sign that said Deceptive Bends. Once we mentioned that title to Hypnosis, who designed our album covers, they looked at the idea of different roads. But that all seemed a little bit obvious. Then the idea came about that it’s the “bends” that divers get. The cover is kind of like the hallucination a diver might get.

Talking more about the 1977 album Deceptive Bends I wondered what was the inspiration behind the, not very often heard brilliance of “You’ve got a cold” and “Feel The Benefit” parts 1, 2 and 3?

You’ve got a cold: We challenged ourselves to write a song about the most ridiculous thing, and  I think we managed it! Feel the Benefit: Kind of like a quilt that we sewed together with various unfinished material, ideas – I think really, it’s still one of the main features of the shows we do today. We love performing it – it has a kind of magic about it!

I loved the honest reply I got to my next question: You have had no new music since 1995 so why tour now? Is there new material coming?

There is a reason for not releasing new material – I don’t want to! I draw the line at heading up a live band that calls itself 10cc, but recording new albums doesn’t seem right to me.

We all get inspiration from someone or something, all of us, so I asked Graham where his musical inspiration come from, what era best matches his musically tastes? It transpired it was mainly the 1950/1960’s:

The Shadows were probably my first major influence, but there’s so many. There’s The Beatles, The Everley Brothers, Little Richard, Eddie Cochrane. Its an unfair question because really as its one you can’t really answer.