Golfers at Parley Golf Centre were left baffled, when their balls kept disappearing.

After a number of reports about golf balls going missing, manager Daryl Dampney was left scratching his head. That was, until someone spotted a somewhat unlikely culprit making off with one of the balls: a crow! 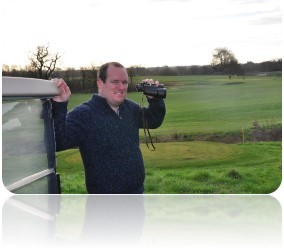 Manager Daryl Dampney attempting to catch the bird-brained bandit in the act.

Tony Whitehead, a spokesman for the RSPB, was able to offer an explanation for the beaked burglars’ strange behaviour, saying:

“It is likely that a single bird is responsible and is mistaking the balls for eggs that it wants to eat. Crows will fly off with food and store it in a larder for later.”

He suggests that a temporary measure to deter the crows would be to use fluorescent balls.