There are no spoilers in this review.

There were a number of reasons that made me pick this book up. One was partly because, like many people, I like a good crime story, but more importantly what grabbed me was that this is written by a local author, with a story that is based around Portsmouth Harbour. I’m glad I did, as not only is it a great story, but I was also able to picture and know many of the locations she mentioned in the book, which helped add in that extra dimension. Although this is Pauline’s 14th novel in the Inspector Horton series, it works well as a standalone novel. 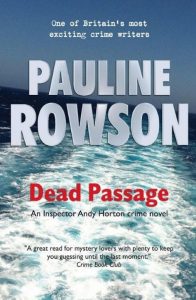 Our inspector unofficially looks into the circumstances of a past death, and along the way discovers what, in his opinion, was a few shortcomings in the original investigation. He also finally solves a few previously unexplained mysteries.  This book has all the juicy ingredients that make a good story: an historic death of a politician, a daughter who urgently wants to speak to the inspector, as she has ‘something to reveal’ about her father’s death, and also a few interesting characters that keep you guessing about who’s telling the truth…and who has something to hide.

Our inspector is an intriguing person. I think I could quite like him; he seems to have a sense of urgency and determination about him, though clearly he has a troubled past. He has a no-nonsense ‘the case needs solving, so let’s just crack on with it’ attitude. He lives alone on a boat in Southsea Harbour, and I couldn’t help but think that the ‘slopping’ of the tide constantly tapping the hull of his boat, along with the rocking motion and sounds of rigging around him in the harbour, both help him to relax in a way that helps him mull over the case.

This is a book I really enjoyed, so much so that I recommended it to my dad! If you are looking for a last-minute stocking filler for someone who likes a good read, you will not go far wrong with this book.

Available in print and e-book