Most of us will be familiar with Charles Dickens’ classic Christmas tale of the miserly old Mr Scrooge, but David Mynne’s one-man retelling offers a refreshingly unique theatre experience.

Housed in the intimate Sherling Studio, with nothing but three large candelabras in place of a lighting rig to set the scene, Mynne achieves the incredible feat of taking the audience on a journey through 19th century London, and the ghostly visions of Christmas past, present and future.

This was the first time I’d watched a one-man show, so I was intrigued to see how the story would be brought to life. I was not disappointed.

The show’s success, I believe, was largely down to Mynne’s physicality; he flowed seamlessly between the characters, altering his mannerisms in a fluid yet perceptible way. On the technical side, it was remarkable to see him build each scene with nothing but the simple lighting, which he controlled as went along. All the sound effects and ghostly background noises were performed by him; nothing was pre-recorded. 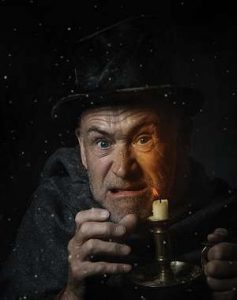 The entire performance was intimate and atmospheric, just one man and his audience. It oozed creativity, with parts of Mynne’s costume often used to simulate other characters. The voiceless Ghost of Christmas Future was particularly well done, with Mynne using a blanket and eerie sound effects to create the illusion of a sinister, ghostly presence.

**** – An innovative, atmospheric and, at times, humorous take on a beloved Christmas classic. Well worth a watch!