12 primates will be celebrating their first Christmas at Monkey World this year. 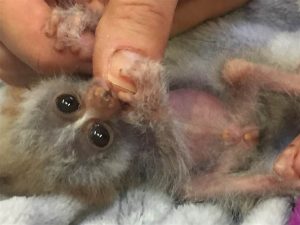 Sadly, the illegal wildlife trade continues to deplete species populations around the globe, and to date Monkey World has worked with 27 governments worldwide to rescue victims of the black market trade.

During 2018 Monkey World assisted the governments of:

Thailand
Chimpanzee Naree was rescued in October, after her confiscation from a circus show, where she was made to perform daily. She has severe facial deformities and only four teeth remaining after her abuse.
Lebanon
Monkey World worked closely with the Lebanese government, to rehome two extremely rare
red-bellied guenons who were seized from a passenger plane in Beirut being smuggled out of Ghana. They also helped when a baby Bengal slow loris was being sold illegally in a Beirut pet shop.
Turkey
Park director, Dr Alison Cronin, rescued chimpanzee Toprish, who was smuggled from the wild for the illegal pet trade.

Closer to home, Monkey World continues to rescue victims of the legal British pet trade in monkeys. Marmoset Freya hit national news in May after she was found loose on the streets of London. The park also
rehomed a squirrel monkey and two saki monkeys, as they could no longer be kept at the wildlife parks they came from.

At the park, all 12 primates are now settling well into their new families. They now have the chance to enjoy spending the run up to Christmas- and the rest of their lives- safe and happy in their new homes.

Did you know?  Monkey World is home to 262 monkeys and apes.