The event, which saw over 100 directors and staff from local businesses sleeping rough, raised over £22,000 – and still counting! When the press release for the event first landed in my inbox, I decided to not only write about it, but take part as well.

I arrived at Chapel Gate just before 7 pm, feeling nervous and a little apprehensive. As the cold started to nip at my extremities, I worried about what I’d signed up for. My initial confidence that I would be fine, with my many layers, blankets and sleeping bag, was quickly wavering. It took an even bigger hit when I saw what my first challenge would be: building my shelter.

I’ve somehow got to turn these into a home for the night. Wish me luck!! #bigsleepeasy @YMCABournemouth pic.twitter.com/WBpot7mWIU 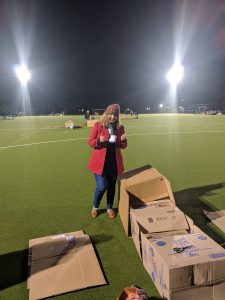 Anyone who knows me knows I’m more Paddington Bear than Bear Grylls, and looking around at other people’s shelters made me wish I’d come a lot more prepared. While others had brought along their own insulating materials, extra boxes, and designs for large, elaborate structures, I stood there armed only with scissors, tape, and a look of blank despair. 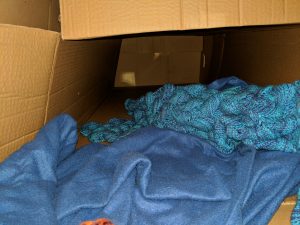 With the kind assistance of Terry and Xiomara, the two lovely ladies I was teamed up with, I managed to fashion a passable, if somewhat cosy shelter for the night. I tried not to worry about the impossible act of contortion required to actually get in there. That would have to be a problem for later. 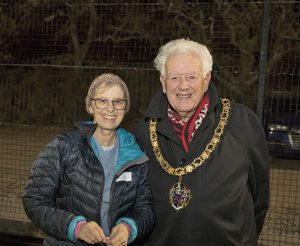 Terry, whose Knit & Natter group donated hats and scarves for the event, with the Mayor of Bournemouth, Cllr Derek Borthwick

I spent an enjoyable couple of hours walking around the pitch, meeting some of the other participants and admiring their shelters. 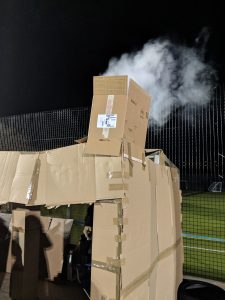 This creation, by the team from Newnham & Jordan Solicitors, was crowned the winner by the Mayor of Christchurch, Cllr Lesley Dedman, for its innovative design and working chimney (powered by e-cigarette vapour!). The team was very proud to show this feature off to anyone who walked past!

Shortly before lights out at 10 pm, we all gathered inside to have a nice, hearty bowl of soup. Conversation petered out, as we all took some time to enjoy the warmth, and psych ourselves up for what was about to come.

When it came to turning in for the night, my fears about getting into my shelter were confirmed. What can only be described as a graceful display of wriggling, slithering and swearing followed. Xiomara had the idea of taping our shelters together, both for warmth and additional structural integrity, and I definitely put that structural integrity to the test. Poor Xiomara was treated to several minutes of seismic activity, before I managed to wedge myself in semi-comfortably. It took me a few minutes to calm myself down, as I realised that I was completely boxed in.

The lack of space meant that lying on my side wasn’t an option, and any movement that wasn’t carefully planned let gusts of cold air into my sleeping bag. Achieving something close to a comfortable sleeping position, while remaining warm, was virtually impossible.

That first hour was probably the hardest, and I tried to distract myself by texting friends and watching YouTube videos. We were told that the toilets and club house would be left open, and I knew that if things got really bad I could even go and warm up in my car. But as I tried to wrap my head around the harsh reality that, for thousands of people living on the streets, there is simply no escape from the cold, I was determined to throw myself into the experience as much as possible. I stopped using my phone, wrapped myself up as tightly as possible, and tried to get some sleep.

I woke up just before the morning wake up call – at around 6:15 am – feeling pretty dreadful. My neck and shoulders were aching, the cold had settled deep into my bones, and my toes were completely numb. Given that I was wearing three pairs of thick socks, several layers (including a micro-fleece), and had a sleeping bag and two blankets, I was taken aback by how difficult it is to conserve heat. Feeling lethargic and fuzzy, but spurred on by the promise of a hot drink, I dismantled and cleared away my shelter, then legged it to my car to blast some hot air on my feet. A little voice in the back of my mind told me that this wasn’t a healthy way to warm up, but I was too cold to care.

It took around 20 minutes for the feeling to return to my toes (I started to get a bit concerned that I’d given myself frostbite!), but by the time I’d had a hot chocolate, I was feeling a bit more human.

Incredibly grateful for a lovely hot chocolate this morning. Thinking of all the people who, unlike me, won’t get to go home to a nice, warm bed.

Conversation around the table turned contemplative, as we reflected on the night’s events and grappled with the idea that what was an unpleasant one-off for us, is in fact the grim reality for nearly 5,000 people in England, on any given night.

It was an eye-opening and humbling experience, and as I drove back knowing a warm bed awaited me, I felt incredibly grateful for everything I have.

A huge ‘Well Done!’ to 100ish fundraisers who woke up in cardboard boxes at #BigSleepEasy @ChapelGateBSC. Cold & tired but knowing they’ve contributed to the fight against #homelessness. With your help we could reach £20k! Please support their efforts at https://t.co/vCLMed3G85 pic.twitter.com/OXkR9d669B

While the money I raised was only a tiny percentage of the overall total, I’m proud to have been a part of this event. I know that my night in the cold will stay with me for a long time, and my hope is that – with the help of charities like YMCA – we can one day see an end to homelessness.