Full blooded passion, love and tragedy played centre stage in Southampton last night at the opening evening of Manon, the Kenneth MacMillan masterpiece performed by the English National Ballet. Full of romance and youthful naivety, this is the tale of a young Manon torn between two lovers.

My curiosity got the better of me and on doing some research regarding Manon’s popularity I discovered that it does not feature in many people’s top ten ballets, I have to ask, why not? This production has it all and is based on the Abbé Prévost novel of 1731, L’Histoire du Chevalier des Grieux et de Manon Lescau, first performed as a comical Opera in 1884 and much later as a ballet in London in 1974, performed by The Royal Ballet. 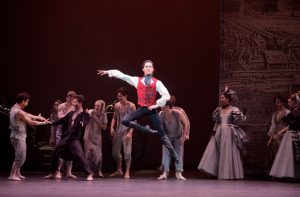 The ballet is in three acts and it is in Act I we meet our characters, when leading lady Manon visits an Inn frequented by the local hedonistic fraternity. Among them are des Grieux, a young student to whom she falls in love with, the wealthy Monsieur GM, and Lescaut, her brother, who is there to escort his sister to a convent. It is here where greed takes its toll as her brother Lescaut makes a financial arrangement with the wealthy Monsieur GM. Her brother promises to ‘make’ his sister fall in love with the wealthy GM but unbeknown to him, the betrayal will have lasting ramifications in all their lives.

In Act II we enjoy an affluent party scene given by the wealthy Monsieur GM in which he continues to impress the young Manon. It is during Act II that you need eyes everywhere. Whilst enjoying the main performers, you really do need to keep an eye on the surrounding tables. There is much of what you would expect to see at a 18th century party clearly going on, but performed in a subtle 21st century way, light comical moments are also included. Before too long Grieux makes his appearance which eventually leads to a game of cards in which Grieux relieves Monsieur GM of his money. Manon and Grieux declare their love for each other but fate then intervenes and Monsieur GM arrives with the police to arrest Manon for prostitution. 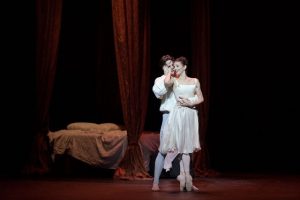 In Act III we find Manon has been convicted and deported to New Orleans where des Grieux has followed. This leads us to the finalé of this beautifully performed ballet and despite it being a 2h 30 min performance with two breaks, the story and dance are so captivating that time seems to sail by unnoticed.

Credit has to be given to Mia Stensgaard for the design and costumes which are superb, as is the music written by the French composer Jules Émile Frédéric Massenet (1842 – 1912) and performed by the English National Ballet Philharmonic.

Manon is on at the Mayflower Southampton and runs through until Saturday 3 November, for details and tickets call 02380 711811 or visit www.mayflower.org.uk