One of the UK’s most successful regional theatres lifted the curtains on a brand-new era in its 90-year history tonight (Sep 26) following a £7.5m refurbishment project.

Mayflower Theatre took a ‘dramatic pause’ as it turned off the lights for the multi-million pound project back in June. Tonight it reopened its doors to the public for the first time to reveal the results of its biggest transformation of the last 30 years.

New environmentally-friendly LED lighting has been installed, the orchestra pit has been moved beneath the stage and accessibility has been improved, with better facilities for people with disabilities. 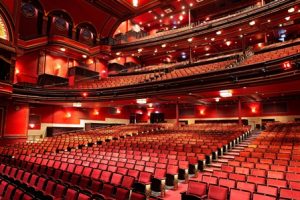 The multi-million pound project will ensure the theatre remains best in class and continues to draw in hundreds of thousands of people to the city. Every year more than 500,000 people visit Mayflower Theatre and the venue contributes an estimated £75m to the economy.

Michael Ockwell, chief executive of Mayflower Theatre, said: “This is without doubt the most significant refurbishment project that the theatre has seen in the last three decades and we were thrilled to lift the curtains on the new look tonight. For us, this project is very much about ensuring Mayflower Theatre remains best in class not just for now, but long into the future.”

The £7.5m investment has been welcomed by representatives from the public as well as the private sector.

Southampton Cultural Development Trust Chairman Brad Roynon said: “Mayflower Theatre doesn’t just bring in huge shows and hundreds of thousands of visitors to the city every year. It also plays an important part in connecting new audiences with theatre and inspiring young people to get involved in the arts. It’s therefore absolutely vital that we preserve this historic and culturally important venue to ensure it remains, and develops further, as a catalyst for the growth of arts and culture.” 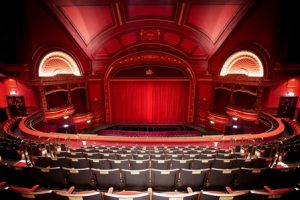 to see the Mayflower theatre opening its doors again. This iconic building is an integral part of the extensive entertainment offering that can be found in Southampton. The theatre is one of the biggest outside of London and attracts people from a huge area. This essential refurbishment ensures that the venue itself lives up to the reputation that it has.”

Mayflower Theatre is the biggest regional theatre outside of London and has seen the likes of Julie Andrews, Laurel and Hardy, Michael McIntyre, Take That and even The Beatles tread its boards over its 90-year history. The venue opened on December 22, 1928 as the Empire Theatre, becoming The Gaumont in 1950 and eventually Mayflower Theatre in 1987. It remains the largest theatre in the south of England and employs 230 staff.

Its reopening was celebrated with a gala evening of music and entertainment, commemorating the theatre’s past and celebrating the future with some of the next generation of stage performers.

The first official performance will be Les Ballets Trockadero de Monte Carlo, which runs from September 28 and 29.

Tickets can be booked online at www.mayflower.org.uk or by visiting the box office.