200 years since its first publication, Jane Austen’s ‘Persuasion’, her final novel, adorned the stage last night at Lighthouse Poole with a heart-warming performance at the start of its 3 night run in Poole. 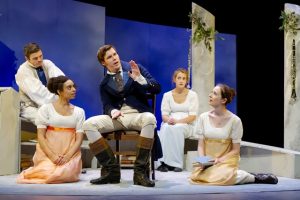 A traditional romantic play with moments of light comedy we meet Anne Elliot (brilliantly played by Ceri-Lyn Cissone) deeply reminiscing about the past where eight years before our play is set she fell in love with a young but poor naval officer, Captain Wentworth. Under peer pressure from her wealth obsessed family Anne rejects the Captain’s marriage proposals and then, forever, she suffers the pain of lost love as our Captain sails away, not with the romance of Anne but with the romance of the sea and foreign shores.

Unexpectedly they meet again, one of those ‘second chance’ encounters, a time which brings Anne, and by now a much wealthier, Captain Wentworth back together. Will true love again blossom again or will they forever pass like two ships in the night?

There are just six performers in this play and each one of them is highly talented, they brilliantly play their parts

with clarity and enthusiasm. In addition to the acting all the performers are very musically talented and between them we enjoy interludes of their musical prowess which included the Piano, Violin, Flute and Clarinet which helps lulls you into an early 1800’s setting perfectly portraying the period in which the play is set. The choreography is timed to perfection with the fashions of the period correctly depicted and all played out on what is a very simply but very effective set.

This play is a Theatre6 production of which this performance is part of a limited UK tour which started last week at the Winchester Theatre Royal before coming to Poole, its last local performance of this production.

Nothing can quite beat a night at the theatre, if you are a Jane Austen fan or simply have not been to see a play recently then you will be hard pushed not to enjoy this production of Persuasion of which the cast at the end of the performance quite rightly deserved their rapturous applause. Post show there was a brief Q&A session with the cast which added that personal audience/cast connection which you do not always get. (Please note I am not sure this will happen at all the performances)

Full cast at this production: