Visitors had the chance to enjoy vintage fun in celebration of RAF100, a packed programme of live music, family entertainment and stunning night displays.

Day one featured a surprise Tornado flypast, Super Pitts Muscle Plane, and Team Raven, who brought their four-ship formation display to Bournemouth for the first time.

Friday saw tens of thousands of visitors witness the very first flight of the Gravity Industries Jet Suit Display Team. Pioneering ground-breaking technology, the team lifted off from Bournemouth Pier, and flew along the beach in three spectacular shows. 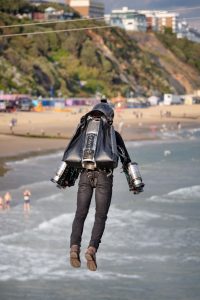 On what is now commonly known as ‘Super Saturday’, the Royal Air Force Red Arrows concluded three days of show-stopping aerobatic displays. The international Breitling Jet Team made their UK debut at the festival, to much acclaim. The popular Night Air programme returned, featuring LED-adorned aircraft, the Fireflies.

The Strikemaster Pair teamed up with the Norwegian Air Force Historical Squadron Vampire Pair, and the MiG for a historic five-ship display that was choreographed especially for the festival.

The festival rounded off nicely on Sunday, with displays from AeroSuperBatics wingwalkers and the Chinook.

The dates for next year’s Air Festival have already been announced: 29 August – 1 September 2019. We have no doubt its success will continue to soar.

We want to hear your thoughts!

We’d love to know what you thought about this year’s Air Festival, so please leave a comment below or tweet us your photos!