A Year 5 pupil at Talbot Heath School, Lola is now one of the youngest people to have completed the incredible Welsh 3000 challenge, which involves 21.5 hours of very demanding climbing and walking. Lola was inspired to undertake the challenge in memory of her grandma, who was cared for at Forest Holme. She managed to raise over £1,500 for the hospice, which holds a special place in her and her family’s hearts.

Lola’s expedition began by walking up Snowdon and camping close to the summit. The next morning, showing incredible determination and strength, she set off, climbing 15 mountains in North Wales that all stand above 3,000 feet tall. Racking up an impressive 104,000 steps, the challenge took her 21.5 hours, split across two days.

She was accompanied by her dad, Gary, who says,

“She was sore and had some aches, but was absolutely buzzing from her experience. It was the hardest thing she’s ever done by far, but with grit and determination she managed it.” 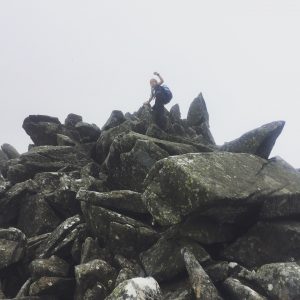 The challenge wasn’t without some hair-raising moments however, as Gary explains. “We had a very scary experience during heavy rain close to the summit of Mount Yr Elen, which was the 12th mountain. We could hear a storm nearing, until eventually at 3,100ft high we found ourselves actually in the storm. The thunder and lightning was very scary and, unbelievably, a bolt of lightning hit the ground, just metres from us.

I just froze, heart in my mouth, and when I turned to look at Lola, she was on the floor crying her eyes out. It was absolutely petrifying, especially as we had no shelter and could do nothing other than hit the summit as quickly as possible and descend. It was awful and something I will never forget. Lola was shaken, but with only three mountains left, the end was in sight and she did it!”

Forest Holme is part of Poole Hospital NHS Foundation Trust, and is supported by Forest Holme Hospice Charity. There is no charge for people in our community in need of hospice care.

Each year, the charity needs to raise at least £820,000 to help enhance NHS provision at the hospice, and ensure that Forest Holme is fully equipped to support patients, and their loved ones, during the most difficult time of their lives.