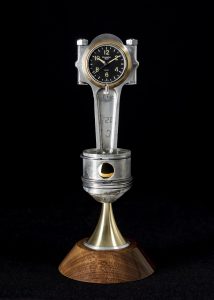 The National Motor Museum Trust is offering enthusiasts a unique opportunity to support the ongoing restoration of its legendary chassis number one 1950 BRM V16 racing car, with the chance to own one of 14 limited edition timepieces constructed from its original pistons.

The historic pistons and their connecting rods originate from the BRM’s supercharged V16 engine, which made it famous during its heyday driven by motorsport aces Juan Manuel Fangio and Reg Parnell as one of the most advanced racing cars of its time.

However, the 68-year-old pistons had to be replaced during a complete restoration of the engine which was found to be necessary by the National Motor Museum Trust, a charitable organisation which has overseen a project raising funds to preserve the car for future generations.

To create the timepieces, a specially commissioned Christopher Ward Swiss-made clock will be mounted to the ‘big end’ where the connecting rod was once secured to the crankshaft, with the typeface and colours of its clock face and hands faithfully replicating those of the BRM’s oil pressure gauge. Marking the incredible engineering that made the car legendary, the piston will be set on a brass and polished hardwood base and fitted to its connecting rod by a specially-made brass gudgeon pin to create the unique keepsake. Each connecting rod is numbered from its original manufacture, highlighting its uniqueness.

The funds from the sale of the clocks will be dedicated to the preservation of the BRM. The limited edition timepieces offer an unmissable opportunity for discerning collectors and motorsport enthusiasts to own part of motor racing history.

The piston clock collection will be launched at the first start-up of the BRM since its engine rebuild in a celebration at Beaulieu’s Spring Autojumble on Saturday May 19th at 3pm. It will be the first time that the public have been able to hear the roar of the BRM’s engine since its last appearance four years ago. At the event, collectors will be able to pre-order their timepieces which are being hand-crafted by TMB Art Metal and BRM specialists Hall & Hall of Bourne in Lincolnshire.

To order one of the six initially released limited edition BRM timepieces on sale at £6,000 (incl VAT), or for more information, contact BRMClock@beaulieu.co.uk.

Paul Owen, grandson of Sir Alfred Owen whose “Owen Organisation” owned and operated the British Racing Motors team from 1952-74, said: “We are delighted to have been able to support the rebuild of this iconic racing car though our family trust and other activities, and the creation of these wonderfully unique timepieces is a fitting way to both recognise and preserve the integrity and ambition of a British engineering project that was way ahead of its time and laid the foundations for the successful British Motorsport sector that we have today.”

TMB Art Metal founder Christopher Bennett said: “We at TMB Art Metal are very proud to be working with the National Motor Museum Trust to create these exclusive BRM V16 desk clocks, utilising redundant original components from an incredibly important vehicle in British motor racing history. Meticulously made by hand, their design very effectively combines form with function, and these extremely exclusive items are certain to be highly sought after with motor racing enthusiasts from across the globe.”

National Motor Museum Trust Chief Executive Russell Bowman said: “It is highly appropriate that the history of our remarkable BRM V16 should be celebrated with the creation of such exquisite collectors’ items. Continuing to preserve and restore this historically important racing car is vital and the sale of the time pieces will help to fund this.”

Made possible by generous donations to the BRM Preservation Appeal, the essential rebuild of the BRM’s engine was boosted when the National Motor Museum Trust became the 2014 Goodwood Revival Beneficiary Charity. Specialist Hall & Hall was the only choice to tackle the complicated and fastidious restoration of the engine.

The car’s complex 1.5-litre engine has in the region of 2,300 moving parts and following its restoration has been tested at 8,400 rpm when it produced 485bhp. In the car’s heyday, it was capable of producing 606bhp at a staggering 12,000rpm, with even greater power outputs predicted. Now those same original components form the basis of the timepieces, with the unique distinction of having powered the BRM to fifth place in the 1951 British Grand Prix.

The BRM V16 was a ground-breaking racing car design with its immensely powerful supercharged 1.5-litre V16 engine amongst its cutting-edge features, while it was also the first car to use disc brakes in circuit racing. Only five examples of this pioneering British design were built, but its impressive pace and legendary roar made it a spectator favourite. The British Racing Motors company was founded by Raymond Mays and Peter Berthon, creators of the pre-war ERA car. Although the V16 was not a success on the track, it paved the way for other racing designs, with British Racing Motors gaining 17 Grand Prix victories from 1959 – 1972.