Poole Hospital’s oncology research team has banned single-use plastic from its department in an attempt to reduce waste and raise money for the hospital’s charity. 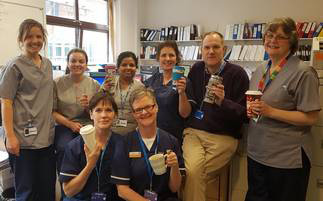 Staff now only drink hot beverages from ceramic, stainless steel or bamboo mugs, which are reusable alternatives to disposable paper and plastic cups. Glasses have also been purchased for everyone in the office to prevent the use of plastic water cups.

The move to go plastic free was inspired by the recent BBC series Blue Planet II, which highlighted the effect of plastic on the environment, and also Penzance in Cornwall which has been named the first plastic-free town in the UK.

If staff from other teams visit the department with a single-use plastic coffee cup, the team have suggested that a voluntary a 30p donation is made to the Poole Hospital Charity.

Sheila Bazett, a research nurse who is leading the campaign, hopes that others will follow their example.

“After seeing the impact that plastic waste can have on the environment, we wanted to give something back, It’s only something small [what we’re doing]but every little helps in reducing the waste that we generate. Hopefully other teams and departments can follow our lead and we can decrease our use of single-use plastic as much as possible.”

Poole Hospital has increased its annual recycling rate from 94 tonnes to 146 tonnes since 2013, and the on-site Costa Coffee offers a 25p discount for staff using reusable mugs while new dry mixed recycling bins are currently being distributed across more areas of the trust.

Steven Fall, sustainability officer, said: “Poole Hospital strives to be a sustainable organisation by reducing waste at every opportunity and we are committed to new recycling initiatives wherever and whenever possible.”