Officers investigating a fail-to-stop collision in Poole are issuing CCTV footage of the vehicle involved.

At 2.49pm on Wednesday 18 April 2018 Dorset Police was called to reports of a road traffic collision at traffic lights on the Hunger Hill roundabout involving a red Ducati Panigale motorcycle and a car. 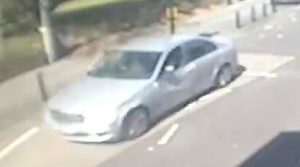 The car – believed to be a silver Mercedes – failed to stop at the scene.The motorcyclist – a 37-year-old man from the Wareham area – sustained serious but not life-threatening injuries and was taken to Poole Hospital for treatment.

Following detailed enquiries, officers are now in a position to issue CCTV footage and stills of the Mercedes car, which was captured travelling at speed outside the Job Centre along Dear Hay Lane following the collision.

Police Sergeant Mark Scammell, of the traffic unit, said: “We have carried out a large number of enquiries into the incident and I am issuing this footage in the hope that someone may recognise the vehicle. I would urge any witnesses or anyone who can assist my investigation to please contact Dorset Police.

“I am also keen to hear from anyone who was travelling in the area with dashcam fitted and may have captured all or part of the incident on camera.

“Finally, I believe this car would have been damaged in the incident and I would ask anyone who knows of a Mercedes car that has sustained damage or has been left parked suspiciously or unusually to please get in touch.”

Anyone with information is asked to contact Dorset Police at www.dorset.police.uk, via email 101@dorset.pnn.police.uk or by calling 101, quoting occurrence number 55180057627. Alternatively, contact Crimestoppers anonymously on 0800 555 111 or via www.crimestoppers-uk.org.