This review contains no spoilers

I last saw Miss Saigon around 20 years ago on Broadway so revisiting the show this time at the Mayflower Theatre Southampton I have to admit I did approach this production with a certain amount of trepidation wondering how much it may have changed over the years; needless to say in the end I was not disappointed. 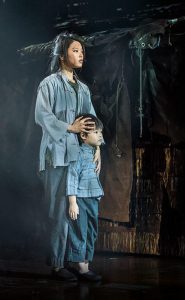 Loosely based on Puccini’s opera Madam Butterfly it shares the same story of a young Asian girl’s doomed relationship, however with Miss Saigon the story is set at the fall of Saigon (now Ho Chi Minh City) in April 1975 and follows Kim, played in this performance by Joreen Bautista*, a young 17 year old South Vietnamese bar girl and her lover, American GI, Chris, played by Ashley Gilmour.

It’s a tragic story which has far reaching implications, we follow the romance at the worst possible moment, falling in love at a time when Chris is ordered with the rest of the Americans to evacuate the city. The story does not end there as we then follow our couple through two different worlds with Chris safety back home in the US though suffering from constant nightmares and Kim as she struggles to find a way to find him back in the USA.

In between all of this we enjoy the story of two other influential characters, ‘The Engineer’ played brilliantly at our performance by Red Concepción who plays the role of a ‘Eurasian Pimp’ and ‘John’ played by Ryan O Gorman a fellow GI and friend of Chris. 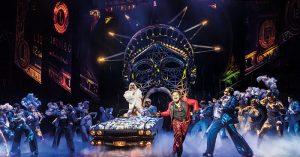 The costumes in this performance fit accurately to the period of the time and at one point the show we are even treated to the appearance of some great blue 1970’s flares! The choreography is superb and could not be faulted; the overall set of the show is of high quality and fits appropriately with the scene, something you would expect to a production of this standard. The scene “An American Dream” was superbly executed by The Engineer.

Throughout its history the show has at times been described by some as ‘racy and sexual’, it is, but we have to remember this fits in with the time period but the production team have managed to keep this element to a respectable level and added in a bit more of a 21st Century element without taking anything away from the story.

This show is a must see and if like me you have seen it before then see it again, it’s worth it! This production is here until 17 March with both evening and matinee performances, for availability and booking details visit the Mayflower Theatre website www.mayflower.org.uk or call the box office on 02380 711811

*Joreen Bautista played Kim at our performance, this show is her first professional debut and I can tell you her voice is stunning, I am convinced Joreen has a long successful career ahead of her.