Lighthouse Poole, always a great venue for any show and gig really excelled themselves last night with the arrival on stage of T.Rextasy, the ultimate Marc Bolan/T.Rex tribute band.

With a near two hour set of pure Rock ‘n’ Roll from the glam rock years of the 70’s it was an evening of hit after hit from the Marc Bolan songbook with songs from many of their greatest albums. 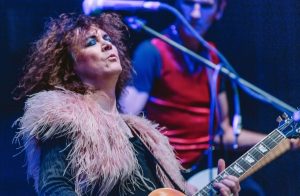 Credit to lead vocalist and front man “Danielz” who frequently used the ‘B’ word, yes, the B side of a record, when did you last hear that expression? Many of the hits played were classics we all know like “Ride a White Swan”, “Metal Guru” and “Telegram Sam” others played were lesser known B sides of singles along with a few tracks from the 1973 album “Tanx”.

Last night’s gig was part of their “Marc Bolan 40th Anniversary Tour” currently touring the UK until the end of the year. Their next local appearance is on Friday 9th February 2018 at the Tivoli Wimborne. If like us you have never seen this band but are of an age where you remember the glam rock years with sentimental pride, then we strongly suggest you treat yourself to a Friday night out in Wimborne, you will love it!

To put you in the mood visit our Life Begins Magazine Facebook page where you can enjoy a small video from last nights performance to put you in the mood https://www.facebook.com/lifebeginsMagazine/  Excuse the shaky video, a concert hall of empty-nesters and early retirees enjoying themselves makes for a rocking hall, yes many still have it!