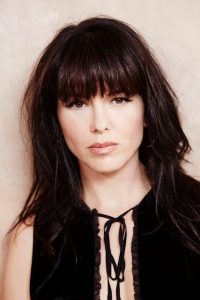 Dublin born singer songwriter Imelda May is one of those artists with a unique vocal talent who spent years on the independent circuit with her debut album ‘No turning back’ (2002) before finally breaking into the mainstream with her album Love Tattoo (2009). Today after periods of marriage breakdown and motherhood and now with her recently released fifth album ‘Life Love Flesh Blood’ (2017) she has firmly set herself as one of the greats who portrays much of her life through the power of her music.

Friday 12 May saw Imelda perform to an almost packed house at the Pavilion Theatre Bournemouth sporting her new ‘rock chick’ look, having ditched her characteristic blond quiff. The film-set style spot lights and smart lighting effects created an on-stage atmosphere that seemed to change with every number. Many in the audience were Imelda May fans already, others, myself included, were converted before the concert was over with the intensity and energy of her music.

Her performance included a mix of past and current music spanning all of her five albums cumulating in her fantastic new album Life Love Flesh Blood. Imelda had a great sense of humour which engaged the audience and drew them into her performance. The highlight for me was her current record ‘Should’ve Been You’ but the moody, mellow ballads interspersed with blues and rock numbers were all performed with such passion that only someone who has first hand experience of the musical themes can show. By the end of the evening, most of the seats were unused as the infectious music had everyone dancing.

Imelda is a highly talented singer songwriter and the latest gig in Bournemouth will be long remembered by all who were in the hall. If you get the opportunity to see her in concert sometime soon during her UK wide tour then make sure you do, you will not be disappointed.

Her current UK tour lasts through until August and being an Irish gal, she also has a few dates in Ireland in May with a quick hop over the pond to North America in June. Locally to us she is appearing at the Isle of Wight festival on 11 June and plays Reading on 12 June, .

Thanks to Decca Records for photography used in this article.