In such a short space of time The Shires (Ben Earle and Crissie Rhodes) have come from nowhere to stand at the forefront of the new UK country scene and in doing so have become the first British Country UK band to have an album in the UK official top ten charts. The duo only formed in 2014 after signing to Decca records and already have had two top selling albums, appeared on Radio 2 and have performed in iconic venues such as Shepherd’s Bush Empire. Not bad for a couple of singer/songwriters who come from the great country music metropolises that is Hertfordshire and Bedfordshire – who needs Nashville? 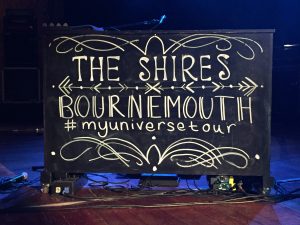 Last night (23rd April 2017) they played to a packed house in the Bournemouth Pavilion and they clearly have a loyal fan base which unusually covers all age groups. I saw young children through to pensioners and each and every one were clearly enjoying the evening. Many seemed to know every word of every song they performed.

Like all good country music there is a story to tell and this comes across clearly in their music. Their own life stories play a major part and these are stories they happily share as introductions to much of their music in a sometimes humorous style. 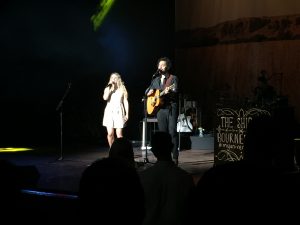 They played a set lasting a little over one and a half hours covering their singles and hits from both their debut albums Brave (March 2015) and from their current album My Universe (October 2016). Among the hits played they included the incredibly heart wrenching Daddy’s Little Girl which Crissie wrote as a poignant memory to her father who was lost to Cancer just over 20 years ago.Their set also featured a couple of covers with one being a cover of the Robbie Williams hit Angels and a cover of Islands in the Stream that featured on the Radio 2 Sounds of the 80s album and now regularly perform at most concerts.

If you want to witness the resurgence in British Country for yourself then The Shires are one group you will not want to miss. Currently they are on a UK wide tour with dates local to us including the Isle of Wight festival (Newport) on 11 June, Bristol Americana Festival (Bristol) on 14 July and the Devon Chagstock Festival (Okehampton) 22 July.