Nadia Clifford and Tim Delap, the actors playing Jane Eyre and Rochester in Sally Cookson’s energetic and imaginative new adaptation of Charlotte Brontë’s masterpiece Jane Eyre took time out of rehearsals this week to visit the atmospheric Brontë Parsonage Museum in Haworth in Yorkshire prior to opening a major UK which will stop at Mayflower Theatre from 9-13 May 2017. 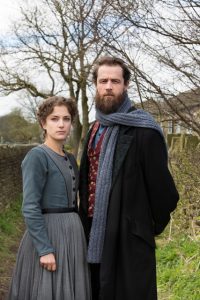 Nadia Clifford and Tim Delap were in costume as Jane Eyre and Rochester outside the famous Parsonage where Charlotte Bronte wrote the much loved story.

Rebecca Yorke, from the Brontë Parsonage Museum said: ‘We are delighted to be working in partnership with the National Theatre on their tour of Jane Eyre and are thrilled to be welcoming the actors to Haworth for a glimpse at the house where the novel was written.’

2017 marks the 170th anniversary of the first publication of Jane Eyre – a significant time to be touring Charlotte Brontë’s classic and much loved story. The highly acclaimed piece is a co-production between the National Theatre and Bristol Old Vic.

This exciting new stage version of Jane Eyre was originally presented in two parts at Bristol Old Vic, and then transferred to the National Theatre, re-imagined as a single performance, playing to sold out houses at the NT’s Lyttelton Theatre.  The production was devised by the original company, with set designs by Michael Vale, costumes by Katie Sykes, lighting by Aideen Malone, music by Benji Bower, sound by Dominic Bilkey, movement by Dan Canham and dramaturgy by Mike Akers.