The Pet Shop Boys stormed the Wessex Hall at the BIC last night (Sunday 26th Feb 17) with a near two hour set setting the sold out arena alive with a plethora of their classic hits and new material.

Formed in 1981 the Pet Shop Boys form part of that electronic era of the early 80’s and yet for some reason they are a band I have never seen, by the end of the concert I was asking myself why? 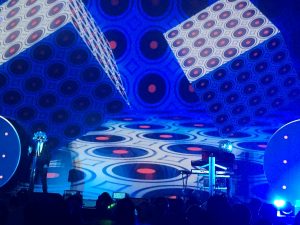 With no support act they came on stage hidden behind two huge spheres slowly rotating revealing both Neil Tennant and Chris Lowe dressed in black and each wearing what can only be described as some kind of metallic futuristic headwear, with the increasingly high intensity of the music and brilliantly bright blue lighting it looked like the spaceship scene form Close Encounters of the third kind, utterly brilliant, what a phenomenal start which had the whole hall standing in the first twenty seconds.

Dry Ice filled the lower hall before beams of lasers infiltrated the swirling plumes and we witnessed an incredible laser show, this added to brilliance of the video screen graphics which at one point included giant cubes rolling like dice along with high visual colours at the back of the stage enveloped the packed hall into a world which the electronic era back in the 80’s probably could not have predicted. 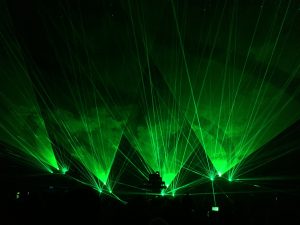 Onto the music and as you would expect there was no faulting it, ‘Let’s make lots of money’ was an early classic played and it was not too long they were onto their 2016 hit ‘The Pop Kids’ from their latest album ‘Super’. The whole evening continuous and continues with the stomping ‘Love Is a Bourgeois Construct’ and the expected classics, ‘West End Girls’ and ‘It’s a Sin’, the crowd were really well on their feet as we approached the end of the show with hits of ‘Domino Dancing’, ‘You were always on my Mind’ and of course ‘Go West’.

The Pet Shop Boys are currently touring the UK and Europe but locally they are scheduled to be back in Dorset in September playing at Bestival 2017, if you have not seen The Pet Shop Boys live before then I promise you that you are in for a treat.