If there was ever a show to deliver such a rollercoaster of emotions, this is it. The performance of Willy Russell’s brilliant Blood Brothers currently showing at Lighthouse, Poole is a sensitive and faithful portrayal of a moving and powerful story that has engaged with audiences across the globe from far-reaching outposts such as Japan & Korea to cosmopolitan cities such as Barcelona and London.

The wonderfully written story has the ability to transcend cultural and language barriers, such is the enduring message that this story tells.

This particular version currently on it’s UK tour and brilliantly crafted by Director Bob Tomson, communicates to the soul in a spine-tingling way that few other musicals can. The story is fast-moving and the cast and crew are barely able to catch their breath before the next scene appears with scene changes crisp and uncomplicated, and much of the time unnoticeable. 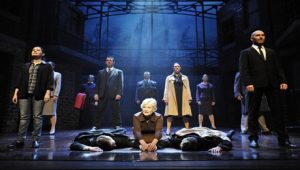 There can be no doubt that this very professional cast, many of whom played multiple characters, had all the hallmarks of a true west-end cast. Many of the main characters making a return to the show’s tour, having previously paid the parts in the capital.

The story centres around two very different families living in Liverpool in the 60s, 70s and 80s with one very big secret that threatens to be revealed at various stages during the performance. The story is a moving one of love, friendship and childhood innocence, which later we see transforms into hatred, betrayal and destroyed innocence as ‘the secret’ breaks towards the surface. The tale is gripping with the cast totally engaging. The audience were whisked on the fast-paced journey to its inevitable conclusion and I’m sure many, like me, found themselves wishing for those childhood days again as the tragedy unfolded before them.

There is a fair amount of spoken dialogue without music, in contrast to some musicals such as Miss Saigon, so for those who are not big musical lovers, this show would definitely suit. But even for musical lovers such as myself, the songs and lyrics were totally captivating, from the moving ‘My child’ to the catchy ‘Bright new day’ and culminating in the spine-tingling ‘Tell me it’s not true’ which left many reaching for hankies and tissues.

The cast very cleverly played the same characters throughout the entire show as the audience witness the life journey from childhood to adulthood. I don’t think O have ever seen such convincing and clever acting as I have done during this performance. The actors and actresses deserve tremendous credit in the way that they so delightfully captured the finest detail of child-hood behaviour and then very accurately translated and carried that same character through the teenage years and into adulthood.

It was difficult to single out any single performance such was the sheer quality of acting and singing. And although the show had to be adapted for the smaller Lighthouse stage, this only led to what felt like a greater intimacy with the audience. The fabulous acoustics of The Theatre at Lighthouse Poole, once again added that extra special touch to the music and it would be no surprise if future performances of Blood Brothers at this venue were sold out. With ticket prices starting at just £27, it represents excellent value for money.

Blood Brothers is showing at Lighthouse, Poole until Saturday 11 September with tickets available online at: lighthousepoole.co.uk or by phoning 01202 280000

This show will have you laughing and crying in equal measure. A true gem and not to be missed in your during 2017