This year’s annual Pantomime, Cinderella, staged at the Pavilion Theatre Bournemouth, is humorous, high octane and full of mayhem, with a scene-stealer horse drawn carriage, complete with 2 real life white Shetland Ponies, who carried Cinderella to the ball.

The Pantomime was closely linked to the well loved fairy story of Cinderella with several modern twists incorporating a few recent ideas such as a popular vine on “youtube”. (without giving away too many spoilers) The audience revelled in the clever humour of adding these.

Special mention must be given to Buttons, Played by Noel Brodie, who’s comedic timing and fantastic ad lib makes him very popular with the audience who he totally engages with. It is clear to see that his stand up comedy played a huge part in his confident, witty responses and his fast thinking replies to anything that was thrown at him. 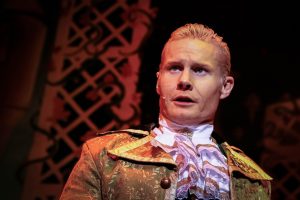 X factor Finalist Rhydian Roberts makes a fantastic Prince Charming, with a gracious air and he worked well with a very a loveable Dandini (Gary Jordan). Its clear to see Rhydian was certainly an audience pleaser every time he sang with his distinct voice.

Dani Harmer who played Cinderella, also know as “Tracey Beaker” from CBBC was extremely popular and likeable with 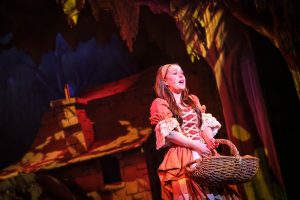 the children and had a great stage presence, the children seemed genuinely upset when she was mocked and teased by her two step sisters.

The ugly sisters played by David Ball and Michael Chance, were extremely funny to watch and I for one couldn’t wait to see what outrageous outfits and wigs they would appear in next, with one tall and one shorter, the match made a very funny duo, who clearly worked well together, ensuring loads of “boos” from the audience as they bullied Cinderella and constantly fed their own huge egos. Their actions taking its toll on poor Baron hardup (David Alcock) who played a very good “hen pecked” step father.

The choreography was slick and very modern in parts, which bought the pantomime into this decade, A colourful set and fantastic costumes, plus the right amount of slapstick and panto “one liners” I can say that this was one of my favourite pantomimes I have seen in recent years.

I particularly liked the use of the gauze and lighting in one scene, when the cast was singing the song “somebody to love”, with members of the cast lit up behind the gauze, this made the scene very effective and I felt as thought I didn’t want to look away for a second. Another mentionable high was the endearing little ballet dancers, who were featured in a scene with the fairy godmother (Melanie Walters), one couldn’t help let out a small “awww”

Cinderella runs until 2nd January, a definite event to add to your Christmas list

If you think you've seen it all in Pantomine, you ain't seen nothing yet. Some great addiitonas to surprise even the most ardent panto go-er.