The ultimate audience participation show where heckling, audience singing and dressing up is actively encouraged returned to the stage at Bournemouth Pavilion last night (Monday Aug 22) at the start of a one week run. 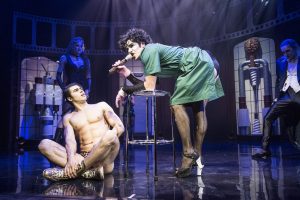 This Ambassador Theatre Group production takes on Richard O’Brien’s classic and is ready to thrill you once again with its frothy fun and naughty moments! Its one of those shows were the audience knows the words as much as the cast and many join in on the memorable classics including Sweet Transvestite, Damn it Janet, and of course, the pelvic-thrusting Time Warp.

Since its first ever performance at the Royal Court Theatre back in June 1973, Richard O’Brien’s Rocky Horror Show has for the past 43 years been a non-stop party!

For those of you out there who may be Rocky Horror virgins a brief synopsis of the show is that newly engaged and innocent couple Brad and Janet end up with a flat tyre, walking back during a violent storm they find a castle where once they are invited in they enter a strange world of aliens from the planet Transsexual, in the distant galaxy of Transylvania….actually, its just too weird so read on then get some tickets, you will love it.

All the parts were brilliantly performed, Janet and Brad played by Diana Vickers and Richard Meek along with Liam Tamne playing the iconic Frank N Furter. Kristian Lavercombe returns to play the excellent role of Riff Raff. 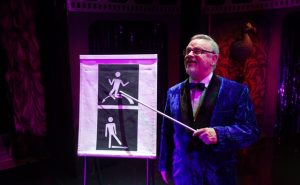 This is one of those rare shows where it does not matter if it runs true to the script or not as the ad-libbing in response to the audience heckling makes every show a unique performance and this was all perfectly orchestrated by our excellent narrator played by Norman Pace.

On to that ‘extra’ who appears in every performance of this show, the audience. Their part was played perfectly; some of the costumes were amazing and whereas today we just smile you can imagine why 40 years ago this show caused outrage in some parts of the world which has helped it achieve such a phenomenal cult status.

A special mention goes to the orchestra, often hidden away this orchestra were in view high up on the set and were fully worthy of the round of applause they received. This is a show well worth going to and comes with our high recommendation.

Rocky Horror Live is currently touring the UK and is performing at the Pavilion Bournemouth. To book tickets and for more details on this and other shows performing at the BIC and Pavilion visit their website www.bic.co.uk or call their box office on  0844 576 3000†,. The show is running from Monday 22-Saturday 27 August 2016 at Monday – Thursday 7.30pm, Friday and Saturday 5pm & 8.30pm. Ticket prices range from £23.25 – £37.00

Be warned, this show has strobe lighting and rude parts!