Detectives are appealing for witnesses to come forward after a robbery on a security van in Christchurch.

At around 11.50am today, Thursday 18 August 2016, a security guard was making a cash deposit delivery at Tesco Express on Barrack Road when he was assaulted by two men. 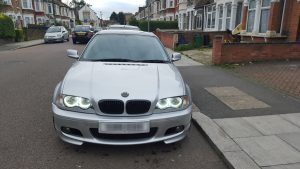 A silver BMW was seen leaving the scene

The offenders stole a security box containing a quantity of cash and are believed to have left the scene in a silver-coloured BMW. It was seen to travel into Jumpers Avenue and was found abandoned a short time later in Endfield Road.

The security guard, aged in his 50s, suffered a slight injury to his hand and was taken to hospital as a precaution. He has since been released.

The offenders were wearing balaclavas and grey tracksuits. No weapon was seen.

Officers, assisted by armed response officers and the dog section, attended the scene to search for the offenders. No arrests have been made.

Detective Sergeant Ian Allen, of Bournemouth CID, said: “I am appealing for anyone who saw two men matching the description given, or a silver BMW, in the area of at the relevant time to contact Dorset Police urgently.”

Anyone with information is asked to contact Dorset Police at www.dorset.police.uk, via email 101@dorset.pnn.police.uk or by calling 101, quoting incident number 18:180. Alternatively contact Crimestoppers anonymously on 0800 555111 or via www.crimestoppers-uk.org.