I wondered if I was the last person in the world to see the musical Cats but based on the audience at the Mayflower Southampton last night I felt like there were many others just like me who then ended up enjoying a purrfect evening.

First performed in 1981 the musical, composed by Andrew Lloyd Webber and based on Old Possum’s Book of Practical Cats by T. S. Eliot, and produced by Cameron Mackintosh Cats has become the fourth longest running musical on the West End playing around the world in over 20 languages. The show was also awarded Best New Musical of the Year in 1981. 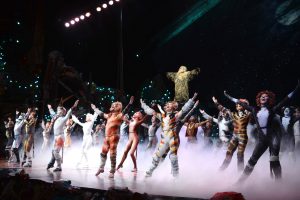 The audience are treated to the honour of being invited into the cats domain. It’s a special night when the tribe of Jellicle cats reunite to celebrate who they are. Suspicious of their human audience they certainly are, but like in the real world the cats start to accept us and start to share with us their names, all three of their names (cats have three names in case you didn’t know): The names their owners give them, their secret name and their tribal name). Throughout the evening we get to know them all, Victoria, Jennyanydots, The Rum Tum Tugger, Grizabella and the rest of the tribe and they all have their individual stories and traits.

The story is in fact a simple one but which helps with some of the younger audience. For us older ones in the audience you are left wondering what the cats will get up to next. Throughout the show the cats go exploring up and down the aisles of the auditorium, at which point you get to see first-hand the shear brilliance of their make-up.

Of the many musical scores probably the two best well-known are Memories and Mr Mistoffelees, both were performed brilliantly, and although like many, I almost know them word for word when you see Memories performed on the stage by Grizbella it brings homes its true meaning.

All the music in the performance is played live and the costumes along with the make-up are dazzling. Despite the story line being simple, what some might feel is lost in the simplicity of the story is easily gained by the superb choreography, singing and the most amazing way in which the cast must have studies the lives of cats -at times they re-enact them in a spooky and strangely similar way.

All in all, it’s a great night out for all the family, get down to the Mayflower and see it as a special summer treat for all.

This production of Cats is currently enjoying a UK tour and is in Southampton at the Mayflower from 9th – 20th August with nightly performances at 19:30 and on some of the days they have matinée performances at 14:00, for ticket availability contact the Mayflower on 02380 711 811 or visit their website www.mayflower.org.uk They do not permit under 2’s in the audience for this show and be aware there is strobe lighting and loud bangs.

80% A purrfect evening out