Little Shop of Horrors, staged at the Pavilion Theatre Bournemouth, was based on the low-budget cult 1960’s film, but this production was in no way “low budget”, with a stunning set, fantastic lighting and brilliant choreography. Starring a real life animatronic plant as Audrey II. Such a creative set didn’t even need an opening curtain, so members of the audience could enjoy the delights of looking at the “interesting shop” before the show began.

Set in downtrodden Skid Row, Little Shop of Horrors follows the tale of Seymour Krelborn, a nerdy and meek assistant at a down-on-its-luck flower shop, where it is clear he is in love with his co-worker Audrey, who is in a relationship with an abusive, sadistic dentist.  Seymour decides to name a unique plant he discovered after her (Audrey II), this later grows into a demanding flesh eating, talking monstrosity with its lizard like look and the need to be fed whole people. This plant promises to get Seymour everything he desires, Seymour has to question his morality and ethics. Can Seymour become a murderer in order to protect this secret and one he truly loves? Whilst questioning “what is the goal of this ever growing plant?”.

Leading the little Shop of Horrors cast is Sam Lupton as Seymour who absolutely “nails” his role as the character, with his facial expressions, geeky way and his strong voice, shining in his performance in the song “Grow for Me” in which we see his brilliant interactions with the plant, also the song “Git it” when the plant speaks to him, it was comical and added a fun dimension to his character.  The song “Suddenly Seymour” was a favourite of mine, when we see his love for Audrey. 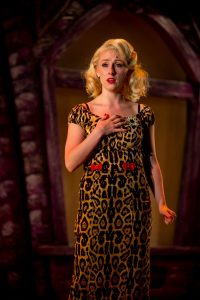 Stephanie Clift shone onstage in her role of Audrey. She was a delight, with a character that dreams of “Somewhere that’s Green”. Her character was strong and very animated as she sang “Sominex/Suppertime” with Audrey II. Stephanie was both loveable and comical, with an incredible performance and an enjoyable personality.

The shop owner, Mushnik, was played by Paul Kissan who gave a lively and good performance during the song “Ya Never Know” and throughout the show. He was realistic within the context of his character and showed fine acting skills.

Crystal, Chiffon and Ronnette were played by Sasha Latoya, Vanessa Fisher and Cassie Clare, respectively. Their intent is to guide us through the different plot developments and the inner turmoil of the various characters, they were fun to watch, appearing in and out of different scenes. I particularly enjoyed the choreography and the song “Da-Doo” where they demonstrated great stage presence and vocal skills.

Rhydian (former X factor star) Played the part of Orin, shining in his portrayal of Orin the “Psychotic” Dentist, He was both eccentric and hilarious during the songs “Be a Dentist” and “Now (It’s just the Gas)” which showed off his fabulous vocal skills and he was clearly a crowd pleaser when he held his last note for an eternity of time, invoking a huge applause.

Audrey II was incredible during the performance. The creative and clever puppetry was by Josh Wilmot,  The audience loved the humour and being centre stage, Audrey II nearly stole the show! It was also nice to see the previously unseen Josh pop his head out of Audrey II’s mouth for the finale.

Little Shop of Horrors  was produced by Sell a door Theatre Company, and runs at the Pavilion Theatre, BournemouthUntil 13th August 2016. Make sure you don’t miss this fantastic performance.

A professional slick show with a lively and energetic cast