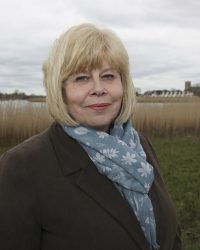 Local author Julie Ratcliffe has added a third title to her popular Smugglers’ Town Mysteries series of books for children. The Moonrakers of Avon will be launched at this year’s Mudeford Arts Festival which is being held on Saturday 30th and Sunday 31st July.

The Moonrakers of Avon is another fast-paced adventure set in 1781, where two Christchurch men are arrested and charged with coining – forging and passing counterfeit coins, which was treason and a capital offence. One of the men is protagonist, Danny Clarke’s uncle and Danny and his friends are in chase to prove the men’s innocence and save them from the hangman.

‘I’ve been thrilled with how popular the books are and I know fans are keen for the next story,’ said Julie, who writes as J A Ratcliffe. ‘As with the first two books, as well as being an exciting adventure story, the context of the book is historically correct and I hope that readers learn a thing or two about life in the late eighteenth century.’

During her research, Julie was surprised at one thing she discovered. ‘The book begins with arrests and a serious charge, so the suspects are taken to Winchester Gaol. I found a copy of prison reformer, John Howard’s 1777 report into prisons and Winchester was a lot cleaner with prisoners provided for far better than most prisons of the age. The John Howard League for Penal Reform is a charity still working with prisons to this day.’

Julie’s first two books were The Thirteenth Box, which was runner-up in the 2012 Self-Published Book of the Year Awards, and The Face of Sam, a story inspired by a carving in the Priory Church.

The Moonrakers of Avon is being published on 30th July 2016. Julie will be at Mudeford Arts Festival on 30th and 31st July where all three books will be available. The books are also available from local outlets, for order at any good bookshop, via Amazon and direct from www.highsailspublications.co.uk . Further details about the books are available from the High Sails website and Julie’s website: www.julieratcliffe.co.uk