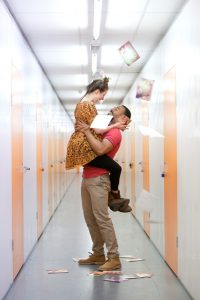 ‘Handle With Care’ currently playing in Poole (Lighthouse, Poole) until 29 May

Travelling through someone’s lifetime whilst walking through a ‘Lok ‘n’ Store’ facility may not be your idea of fun but this theatre company created and performed a compelling piece of drama.

Spending two hours walking around a ‘lok ‘n store’ facility may not be everyone’s ideal way to spend an evening at the theatre but in this new unique and thought provoking play “Handle with Care” that is exactly what you get along with a highly charged atmospheric experience which puts you right in the heart of the action.

Presented by the ambitious theatre group “Dante Or Die”, Handle with Care is a play that was brought about after some of the crew were in a storage facility themselves putting props from a previous show away, they got talking to one of the staff who told them about the type of people who use these storage facilities and the stories that revolve around them and form that moment this intriguing play was born.

If you have never been to a storage facility they are in fact highly efficient modern buildings, think of shipping containers and then put them into a warehouse, only on a smaller scale and you soon see the simplicity. They are temperature controlled buildings which look like long corridors on a ship but with a feel of coldness around them; it is this that helps give this play such an authentic rawness about it.

This is a play in which you really do feel part of the performance, indeed you are actually centre stage of the performance, right in the middle of the action as it takes place all around you, you are the fly on the wall and you feel like a voyeur looking in and yet the cast are so professional they somehow ignore you, looking through you as if you are a ghost whilst they immerse themselves in the story of their lives.

We were part of a small audience of just 13 which is just on the maximum size of each audience group and this helped in the intensity of the performance, we joined Zoe and her brother Mikolas as he was preparing for his trip exploring the world, its 1988 and the initial set really sets the scene  with the 1980’s clothing, music and as it was set in a time when we had no mobiles you get to witness the brother/sister bonding portraying the care and concern before he set off on his travels. 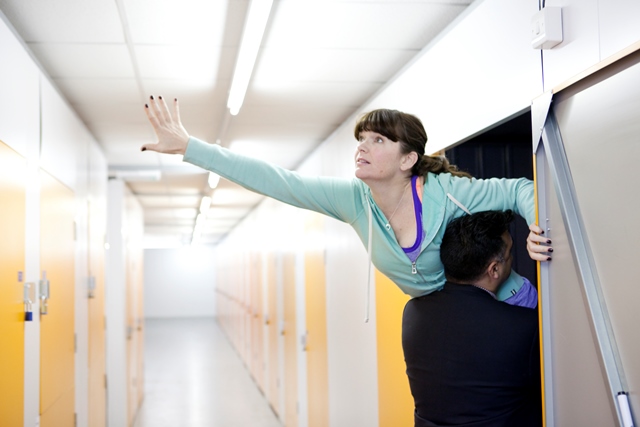 Each time we leave a container or corridor the year is written up so we know exactly where we are in Zoe’s troubled life and she navigates her way through the 1980’s, a time when life and technology was growing at such a fast pace you basically had to keep up.

Into another container, we were now in the late 80’s early 90’s and we are met with reminders of that period – 7 inch singles scatter the floor from Culture Club and Queen to name just a couple. A tape recorder, a Walkman and over on the side lies a Truprint envelope – a reminder of when we sent our films off and hoped they came back! It’s the props in this play that are so clever, they leave you being able to historically place the play but also help in your own reminiscing Beit 7 inch singles to teamades.

We all meet up with Zoe again who by now in a troubled relationship. Two performers, 13 members of the audience and one usher are all in a room measuring around 5m x 4m. When you are in a space this confined, the ensuing argument they play out really hurts, its intense and as it was said to me, it goes to show what it must be like for some children who in their lives witness their parents arguing. It’s actually compulsive watching as the sounds and noises reverberate around the container.

We reach 1998, a time of house music and rave, again the music is spot on and really fits the period we are in. Zoe is still trying to find her direction in life, again she places her life in a container before again moving on.

The complete performance lasted just on 100 minutes, the time flew by and just as I was wondering how this play would end, it ended in a way I cannot and will not describe as I do not want to spoil it for those planning to watch it.

As brilliant as this play is it is not for everybody. If you like to sit down to watch your play and maybe enjoy a drink/ice cream at the interval then do not go on site to this play. If you like to view a production in real surroundings, enjoy your art and theatre played out with the uniqueness of you literally being in the same surroundings as the performers then make sure you do not miss this unique event.

Handle With Care is currently playing in Poole until 29 May before moving onto Shoreditch – playing there from 3 – 25 June. If you do get to see it, you will never look at your own sentimental belongings in the same way again.

For booking details in Poole visit www.lighthousepoole.co.uk or call 01202 280 000 for details on the production company. Visit their website www.danteordie.com on Facebook at www.facebook.com/danteordie and on twitter @danteordie

As brilliant as this play is, it is not for everybody. If you like to sit down to watch a performance and maybe enjoy a drink/ice cream at the interval, then do not go on-site to this play. If you like to view a production in real surroundings, enjoy your art and theatre played out with the uniqueness of you literally being in the same surroundings as the performers, then make sure you do not miss this unique event.