Two witnesses have come forward following a CCTV appeal in connection with the death of Julie Cook who died following an alleged assault in Bournemouth. 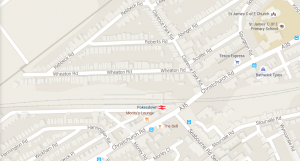 Officers were called at 12.53am on Tuesday 3 May 2016 by staff at Poole Hospital to reports that a woman was found with serious head injuries shortly after 8pm on Monday 2 May at an address in Clarence Park Road in the Pokesdown area of the town.

Sadly, Julie Cook, 44 and of Bournemouth, died yesterday evening – Thursday 4 May 2016 – in hospital as a result of her injuries. A murder investigation, led by Dorset Police’s Major Crime Investigation Team, is now underway.

Enquiries have revealed that Julie was travelling with a man on the London Waterloo to Weymouth train on the afternoon of Monday 2 May.

At 3.37pm the pair are seen to leave the train at Pokesdown railway station. It is believed they had an altercation on the platform before they walked out of the station towards Christchurch Road. It is understood the pair arrived at the address in Clarence Park Road sometime between 4pm and 4.30pm.

Detective Inspector Neil Phillips, of MCIT, said: “We have now launched a murder investigation following the death of Julie Cook. As part of my investigation, I am trying to establish her movements in the hours before she was found seriously injured.

“I have released these details in the hope that someone may have seen the victim and a man travelling on the train, getting off at Pokesdown station or walking toward Clarence Park Road. Yesterday, I released a CCTV image of two witnesses I wished to speak to and they have since contacted us.”

A 36-year-old Bournemouth man who has been arrested on suspicion of murder is assisting officers with their enquiries.

Witnesses and anyone with information should call Dorset Police in confidence on 101 quoting Operation Oxbow. Alternatively, call the free and anonymous Crimestoppers line on 0800 555 111 where mobile phone tariffs may apply.