When George Orwell first published ‘1984’ way back in 1949, he could never have predicted how close much of what he was writing would be to reality in our today’s world, albeit it a little later than 1984. Furthermore had someone mentioned to him that one day it would portrayed in ballet form in such a formidable way he would probably have sent the person making such a ludicrous claim to room 101 for a check-up from the neck-up – but it works and it works in a brilliant way.

Before the show I had some big reservations on how such a cult book which has already been successfully adapted to the big screen could replicate itself onto the stage as a ballet. I needn’t have worried as Jonathan Watkins, the creative genius behind this production has brilliantly choreographed an intense, gripping and at times chilling production that left the audience ‘gobsmacked’ by the finale. The rapturous ovation was more than well deserved, though the high pitched whistling in my wife’s ear from behind was not so welcoming.

Our hero, Winston Smith (played by Tobias Batley) has a day-time job rewriting past newspaper articles so that the historical records portray the party-line to future generations. Dressed in a plain two-tone blue suit along with a matching tie which brilliantly communicates the authoritarian world in which he lives and works, he enters a junk shop in the slums of London where he finds a book that inspires him to write a diary (which is forbidden under the ever watchful eyes of Big Brother) and here his story begins. 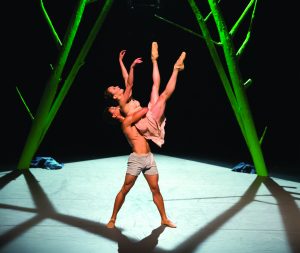 It is not long before he falls in love with Julia (Martha Leebolt) who works for ‘The ministry of truth’, Julia is against the party doctrines and together they embark on a rebellious love affair. As we follow their blossoming relationship they lead us into the countryside away from the ever-seeing eyes of Big Brother. Here they are free from the confines of the world they live in and we witness what can only be described as the most beautiful and sensual of dance routines.

During the second act we get to see more of a particular character called O’Brien (Javier Torres), a member of the Inner Party. O’Brien befriends Winston but all is not as it seems. As the ballet reaches its climax and the couple have been arrested by ‘The Thought Police’, we enter the powerful and brilliantly portrayed dance scene where Winston goes though mental and physical torture as part of the process of surrendering his love for Big Brother.

The storyline and choreography throughout the show is almost hypnotic as the audience find themselves caught up in and almost a part of their tortuous world.

The set with the ever watchful eyes looking out over the audience, the performer, the choreography and the excellent live music played by Northern Ballet Sinfonia all makes for a thoroughly enjoyable evening and if you have the time this week, it is one show you will be glad you went to see.

The Northern Ballet 1984 is performing at The Mayflower Theatre Southampton all this week through until and including Saturday, the show runs for 2 hours with one interval. Prices range from £21 – £38 with performances at 19:30 evenings with an additional 2:00pm showing on Thursday and Saturday. You can find out more at the Mayflower box office www.mayflower.org.uk or 02380 711 811

1984 is currently being performed at The Mayflower Southampton, before moving onto London’s Sadler’s Wells  (Tuesday 24 – Saturday 28 May) as part of a 2 month mini-tour.