Detectives in Bournemouth are appealing for witnesses to come forward following an attempted robbery in the town – with a CCTV image of the suspect being released.

At around 10.22pm yesterday, Tuesday 19 April 2016, a masked man entered the One Stop Community Store on Anchor Road brandishing a penknife. The suspect demanded cash from the till while waving the knife.

Two members of staff refused to hand over the cash and the suspect left the store empty handed. He ran off with a second man who had been waiting outside. 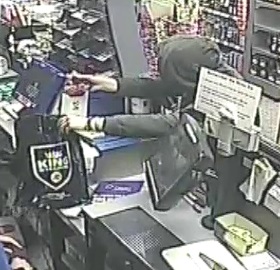 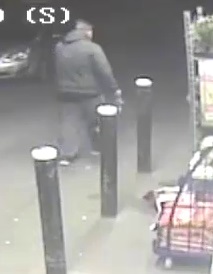 The suspect is described as white, five feet six inches tall, of big build and with light brown hair and a local accent. He was wearing a grey hooded top with the hood up, matching grey jogging bottoms with white stripes down the side, black trainers with white soles and he had a black scarf covering his face. It is believed he could be aged in his 20s from the way he spoke and his mannerisms. He carried a drawstring JD sports bag.

The second man is described as shorter, of slim build and was wearing a blue hooded top with the hood up, grey jogging bottoms and black trainers.

Detective Constable Angela Singleton, of Bournemouth CID, said: “This was a frightening incident for staff at the store. As part of my investigation I am now in a position to issue a CCTV image of the suspect. I appreciate that his face is covered but I am appealing to anyone who recognises the man from the clothing he is wearing to please call me urgently on 101.

“I would also like to hear from anyone who saw either man before or after the relevant time in the area of the One Stop store.”

No arrests have been made.

Witnesses and anyone with information should call Dorset Police in confidence on 101 quoting incident number 19:416. Alternatively, call the free and anonymous Crimestoppers line on 0800 555 111 where mobile phone tariffs may apply.