Bournemouth Pavilion was the venue for a scintillating evening of 80’s music and dance as we enjoyed the first night of “Footloose” the musical based on the hit 1980’s film.

The story follows the life Ren McCormack (played by Luke Baker) who with his Mother moves from big town Chicago to the rural settling of small town ‘Bomont’ in the bible belt of West Virginia – a place that Ren soon finds out has made dancing illegal. It’s not long before Ren finds himself getting on the wrong side of the local law as he sets out to get the local town council, led by the Reverend Shaw Moore, (played by Nigel Lister) to see the error of their ways. The show also stars Gareth Gates who plays Willard, friend of Ren – an endearing character, if a little lacking in self confidence. 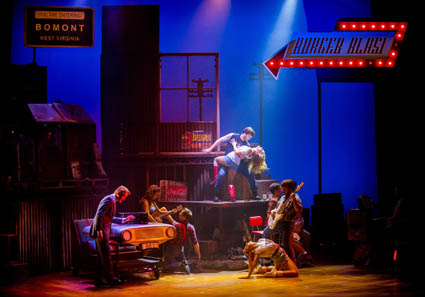 The entire performance is played by a relatively small cast (I counted just 17) who are all full of energy and commitment. Impressively, all the musical instruments the cast play are actually played live and from what I could see no lip-syncing either! The costumes, particularly for the female members of the cast, all fit in with the 80’s era even down to the crimped hair.

The show is jam-packed with the music of the 80’s with choreography to match, including the hits Holding out for a Hero, Almost Paradise, Let’s hear it for the Boy and of course the track from where the show takes its name Footloose.

The “True professional of the night award” has to go to Maureen Nolan who during the finale managed to trip and fall. Fortunately she seemed okay and within seconds she was helped back up, smiling and carrying on – a true professional!

Produced by the Award Winning Team at Sell A Door Theatre Company – producers of Avenue Q and American Idiot, it’s noticeable that some of the ‘adult humour’ from those shows also come across to this one. Much of this didn’t feature in the original film although don’t let that put you off as it’s only in a few scenes and doesn’t spoil the overall enjoyment of the show.

If you are looking for a good evening out full of dance and music with the feel good factor from the 80’s then this is definitely a show worth seeing. It is playing at the Bournemouth Pavilion all week upto and including Saturday 16 April. For tickets visit www.bic.co.uk or call the ticket office on 0844 576 3000

A good cast, with strong music content throughout. A smattering of adult humour which some may find offensive but overall an enjoyable show, particularly if you grew up in the 80s.