Councillor Mark Anderson, the BCP Conservative Shadow portfolio holder for the environment, is calling on BCP Council to allow residents to put out extra recycling for collection in a bid to cut down on the increasing instances of fly-tipping and bonfires.

Speaking to BH Living Mark Anderson highlighted an increase in people now buying mail order and then not being able to legally dispose of the packaging, Cllr Anderson said “ several of my residents have already asked me how can they get rid of this excess waste legally” he went on to say “if some BCP residents are asking how can they dispose of this legally, how many are already dumping illegally?” 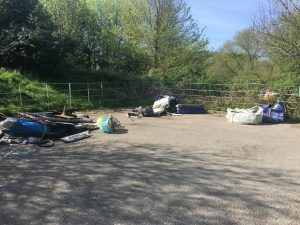 The Queen’s Park Ward Councillor is now pushing the council to allow residents to put out the extra recycling they are accumulating in this current crisis. He said that the BBC is reporting an increase in fly tipping across the country with some areas reporting increases in fly tipping of instances of over 75%. Locally this has now been reported in Millhams Lane (pictured), Cherry Trees Nursey and also by the car park at Two Riversmeet Christchurch.

Local MPs have also raised concerns with Bournemouth East MP, Tobias Elwood recently tweeting that he had written to BCP Council to ask for the recycling centres to be opened for a trial period. Mr Ellwood did concede that this was a local matter for the council however.

The Bournemouth Conservative Group have also supported the calls being made by local MP’s for the recycling centres to be reopened providing suitable arrangements for social distancing be made, its group leader Cllr Mellor added “ we will be speaking to officers to try and see how we can make this work”, in the meantime we are asking the council to allow residents to place one extra bag or box of recyclable rubbish out with their normal recycling bin, this will hopefully reduce the waste residents are accumulating and remove the need for them to have bonfires or to illegally dump rubbish.

Do you think this is a good idea? Are you seeing an increase in fly-tipping in your area? Comment below or email the editor here