The Regent in Christchurch recently celebrated its first First Run film screening in over 46 years since the original Regent cinema closed in 1973.  Downton Abbey was shown at the Regent from its opening day on Friday 13 September for no less than 52 screenings before finishing on Thursday 10 October. At the end of the run, nearly 12,000 film fans had been to see Downton Abbey at the Regent,

Universal Studios, which released the film, were delighted to inform the Regent Management, after they had collated the first day’s national box office receipts, that the Regent was the No 1 Independent cinema in the UK and Ireland for achieving the highest gross figures.  When it came to sending in their weekly report to Universal’s head office in America after the first week of Downton’s release, the Regent was mentioned in despatches to the studio bosses in Hollywood.

During the run of Downton Abbey at the Regent, a special bucket collection was held after every screening on behalf of the Dorset Blind Association of which Julien Fellowes, the scriptwriter for Downton’s TV series and the film, is one of their patrons. 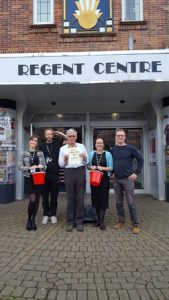 The Regent is really pleased to announce that the bucket collections have raised £2561 for the Dorset Blind Association during the run of Downton Abbey.

Julian Fellowes very kindly recorded a personal “good luck” video message for the Regent, which was played before every screening of Downton Abbey.

The Regent have previously worked with the charity to host the Dorset premiere of ‘Victoria and Abdul’ as the Director, Stephen Frears, is another of their patrons!

The Head of Fundraising at Dorset Blind Association, Gareth Owens, sent this message of thanks to the Regent:

Even though I can now pretty much repeat every line in Downton Abbey verbatim, I’m somewhat deflated now Dorset Blind Association’s bucket collection residency at The Regent Centre has come to an end. Not only did we manage to raise £2561 from their benevolent patrons, but it’s been a great experience for me and for our fundraising volunteer, and the staff and army of volunteers at the venue have been nothing short of AMAZINGLY SUPPORTIVE to us – I can’t thank them enough. Thank you kindly, Felicity Porter and Laura Dean and your merry bunch of theatrically inclined cohorts for your support.